It was a beautiful day, the rain had stopped, the sky was clear and a magnificent rainbow filled the sky. They were no longer cooped up with all those animals and the fresh air was a sweet perfume to their nostrils. And if that was not enough, God spoke a blessing over Noah and his family, “Be fruitful, and multiply, and fill the earth”. Noah built an altar and worshiped God. Life was good!

Although God had declared Noah a righteous man, Noah’s family had an opportunity that at some point in time we all have wished for, a fresh start. Not since the garden had there been as pristine, pure an environment. No sin, no distractions, no evil – a perfect setting to live happily ever after. Life was good!

Noah and his family left the mountains of Ararat where they disembarked, known today as Turkey, and headed east. Eventually they came to the plain of Shinar where Babylon was located and decided to settle down so they built a city and a tower that reached to heaven, “Otherwise, we be scattered abroad over the face of the earth”. Sounds like a natural thing to do except for one minor detail – God had commanded Noah to replenish the earth (Gen 9:1,7,9), not settle down. Three times God commanded men to fill the earth and we all know that when God says something three times we need to pay attention! Alas, they deliberately rebelled against God’s Word. Life as they knew it was about to change drastically! 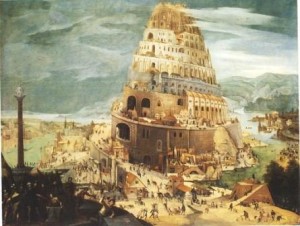 God came down to see the city and the tower the men had built. It had not been that long ago that God judged the extreme wickedness on the earth with the flood. The Godhead held another conference (1:26, 3:22) and decided to confuse the languages of the workers making it impossible to work together. Can you imagine the next morning when the men showed up for work and one man asked for another brick?!

The people refused to follow God’s plan so now He acted to “scatter them over the face of the earth”.

The story is a familiar one. Every child learns about the tower of Babel in Sunday School. Even the unchurched know the story and how God scattered the people and confused their language. For years I simply thought the problem was that the people wanted to reach heaven. But it is much more than that! What was so serious that God would do this? Two things characterized them, they:

• were unified in their rebellion against God.

They wanted to build a city and a tower so they wouldn’t be scattered.This  confession proves they understood God’s will but refuse to do it.

• wanted to make a name for themselves.

Fortunately we are much smarter than they were, or are we? God had told them to be fruitful and multiply and fill the earth. They stayed in a clump, doing what they wanted to do. Don’t we do the same thing? After all God has not given us the same directions, or has He?

Below is what is commonly called “The Great Commission”

Go therefore and make disciples of all the nations, baptizing them in the name of the Father and the Son and the Holy Spirit, teaching them to observe all that I commanded you; and lo, I am with you always, even to the end of the age.– Matthew 28:19-20

The term disciples was the most popular name for the early believers. Apprentice might be another word we could use today. A disciple attached himself to a teacher, identified with him, learned from him, and lived with him. He learned, not simply by listening, but also by doing. Jesus had disciples and taught them so that they might be able to teach others (Mark 3:13ff).

A disciple is one who has believed on Jesus Christ and expressed this faith by being baptized. He joins a local church that he might be taught the truths of the faith. He is then able to go out and win others and teach them. This was the pattern of the New Testament church.

The flood had wiped out the world’s population and the command to the people was to be fruitful and multiply. Today the command is not to populate the world; rather it is to make disciples everywhere you go. Live in such a way that Jesus is made known to the lost and dying, and when they become believers we are to teach them the Scriptures so that they in turn will go out and make disciples.

This is where we have to admit that generally speaking we look a lot like the people of Babel. We’ve been given very similar instructions. Yet we stay in a clump, doing what we want to do. We only take our cars to Christian mechanics, do business with Christians etc. We go to church each week and talk to ourselves never reaching outside the walls. You see we don’t want to be scattered and we want to make a name for ourselves. After all we pay the pastor to preach, win the lost and teach those who show up each week. If someone happens to come inside our walls and get saved, they are baptized and welcomed in where they join the rest of us within the walls.

We want to make a name for ourselves by having nice big church buildings, the best choir/missions/youth/children’s programs. The best preaching and teaching, the most converts, largest numbers etc. We want to be known as “The Church” in town. When we become “The Church” in town everyone will want to come and join us inside our walls and eventually they become like the rest of us.

The only way a local church can be “fruitful and multiply” in a healthy manner (not by sheep swapping or growing in number) is with a systematic discipleship program where the word of God is being taught and to do life with others. This is the responsibility of every believer and not just those “called into ministry”.

What about you and your church? Are you all in a clump, not reaching out beyond your walls? I don’t mean that you simply “support” missionaries. I am talking about getting out getting your hands dirty with the lost, hurting and needy people all around you as well as with other believers who need Jesus with skin on! Maybe you are doing that, but are you discipling them? Investing the word into them, doing life with them, walking through the hard stuff with them?

Maybe you go to a church who has strong teaching from the pulpit and small groups. What are you doing with all that you are learning? Are you finding others to pour into? Or are you simply gaining knowledge and keeping it to yourself?

It is quite possible that the Godhead may call a conference and decide to scatter His church in order for them to multiply and not simply increase! Maybe the scattering has already begun!

I would love to hear your thoughts on this, write them in the comment box and let’s get a conversation started!