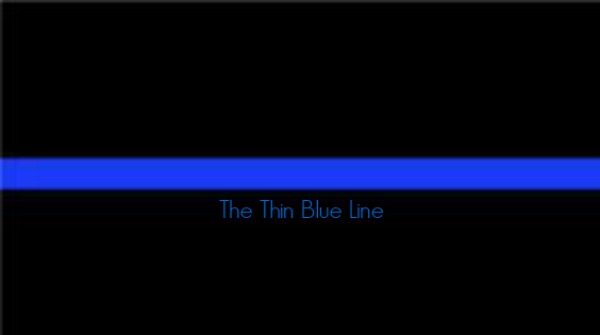 I would like to present today’s guest blogger, my husband David Lawson. In light of recent headlines I asked him to address the issue from a perspective that most people are not familiar with.

There is a thin line between anarchy and civilization, between peace and terror. It is a thin line that allows me to play with my grandkids in the park during the day and then sleep well that night with only a flimsy wooden door between me and the world. And today it is a very thin blue line.

In the last week it seems that all out war has been declared against the police. This is not a war simply against the men and women that form that thin blue line, but against society, against civilization, and ultimately against God Himself. Every assault, every killing, strikes at the heart of our society and at the heart of God.

With every murder of a police officer the people they protect become more and more fearful. More citizens arm themselves, which is their right, and more, not less, racial tension is created. With every murder of an officer people take sides and look suspiciously at people they think might not be on their side. With every assault the police become more fearful and there is a greater chance of a mistake happening in the heat of the moment.

The attack on the thin blue line cannot be justified or excused. This is not a “they killed one of ours so we killed two of theirs” situation. It cannot be tolerated. Instead it must be met with overwhelming support from the society. The civilians must rush to that one place where the line is assaulted and back up the officers on the front line.

In 1977, when trying the murder of Dallas Police officer Robert Wood, District Attorney Doug Mulder borrowed a line from Rudyard Kipling, and referred to the police as a thin blue line that separated the public from anarchy. Ronald Reagan later referred to police officers as “manning the thin blue line that holds back a jungle which threatens to reclaim this clearing we call civilization.”

Police officers are the only thing that stands between civilization and total anarchy. They are ordained of God for that very purpose.

They are, whether they are Christian or not, ministers of God The apostle Paul, in Romans 13:1-7, said that all authority is from God and we as Christians are obligated to obey those authorities. We do not have the right to take matters into our own hands. The police, described in these verses as the one who “does not bear the sword in vain” are ministers of God. The sword, by the way, was not a tool for punishment, but a weapon of deadly force. To assault them is to challenge civilization, challenge the government, and challenge the authority of God Himself.

God ordained the thin blue line to preserve society, to protect us when we cannot protect ourselves. In the ancient days cities had walls surrounding them. At night the walls were manned with watchmen and the gates were locked. The city slept in peace because the walls kept the evil away from their homes and families. Today, we have no physical walls, but we do have a blue line that patrols our world and keeps the evil away from our homes and families. At night I lock my door knowing that the locks will not really keep the bad guys out. But, it will slow them down while the blue line responds to protect its citizen.

The thin blue line. You can mock them, scream at them, hate them, and curse them to their face. But, at night when you go to bed they are the ones that keep your world safe from anarchy. If you doubt that total anarchy is only one very thin blue line away, remember New Orleans and Hurricane Katrina. Civilization lost that day and the world was in anarchy.

I am not arguing that the police are perfect. They are no more perfect than you or I. I am saying that there are many ways to address a grievance, but killing a minister of God is NOT one of them.

God will hold accountable those who assault the thin blue line. If this is war, it is a war with your Creator.