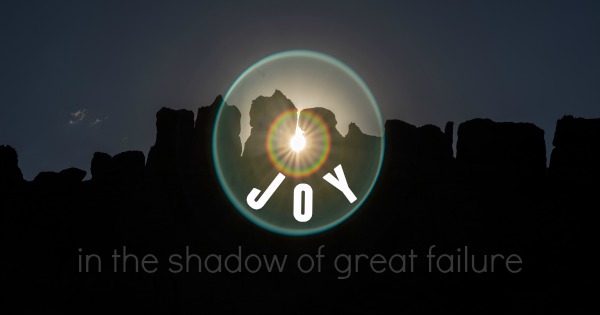 Joy in the Shadow of Great Failure

The Man was handsome; he had red hair, beautiful eyes and he loved God with all of his heart. But the thing that drew many people to him was the fact that he was probably the most joyful man they had ever encountered. His eyes twinkled and it is rumored that he was known to have danced freely in the streets as a younger man.

If you were to stop and ask about his story he would joyfully share it with you, leaving nothing out and capturing your heart with each twist and turn and ultimately surprising you with the ending. But rather than leave you hanging you can read it for yourself!

The Man was the youngest son of 8 children born to a hard workingman, who believed boys needed to learn how to work. As a boy his father taught him about God and he was a good student. While working for his father The Boy’s faith not only grew wide but it grew deep. The Boy learned how to overcome his fears and stand courageous, lessons that served him well later as he served as a commander in the military.

It was evident to all around that there was something special about The Boy. A stranger came to town and he saw it too and prayed a blessing over the young man.

The Boy understood who his God was and the covenant relationship they had. So when he arrived on the scene of a man bullying his brothers and their cohorts, calling God names and mocking Him, The Boy couldn’t simply stand by and watch. He had to take action and the young man knew God would be with him. Although the bully taunted him too, The Boy stood firm, faced the intimidator and literally stopped him dead in his tracks.

His bravery drew the attention of all who heard and they sang his praises for taking care of the bully. When The Leader in the community heard the story, he took The Boy under his wing and invested in his life. The Boy learned a lot from The Leader during the journey they travelled together. In fact, even though their time together was not always pleasant it was a time of great spiritual formation for The Boy.

Along that journey The Boy made a friend, not an ordinary friend but one that he loved like a brother. He was the kind of friend that you are fortunate to have during a lifetime. The two were inseparable!

The Boy became a young man and he grew in wisdom and strength and was loved by all, well almost everyone. The Man served The Leader well and honored him despite some questionable business practices and a growing spirit of jealousy. It was a jealousy that came from understanding that The Man was a man of integrity and that he loved God with his whole heart. Eventually The Leader’s jealousy got the best of him and he orchestrated circumstances to get rid of the young man. The Man left saddened by the way things had turned out.

Despite the unfortunate circumstances The Man understood authority and honored The Leader who was in authority, not only over him but the whole community. The Man did not bad mouth him, nor did he try to get The Leader removed from his position. As a result God honored that and eventually removed The Leader from authority and placed The Man into that position.

It was apparent, just like when he was a young boy, that God’s hand was on The Man.

The Man was met with success as he continued his life journey in this new position God had placed him in. He drew on the life lessons he had learned under The Leader and led with a rare combination of love and strength always looking out for the best interests of those who served under him. The result was that not only was The Man blessed but all who were led by him and their families were too.

The Man was at the height of his career; he ruled over a vast empire and his capital was enriched with international assets. But, in the midst of all this success The Man fell and his character became stained with the sin of adultery.

The day started like any other, except that instead of going to work he stayed home. While looking out at the view from his house, he saw a beautiful young woman off in the distance and she caught his attention. The man asked about the young woman and found out she was the granddaughter of one of his longtime, faithful and influential staff members, and the wife of a younger and most trusted staff. Even knowing who she was, The Man asked one of his staff to invite her over. From that moment on his life changed drastically!

As you may have guessed The Man slept with the beautiful young woman that day. The Beautiful One soon found out she was pregnant with The Man’s child. Her husband had been off working a special assignment so The Man brought him home hoping that he would sleep with his wife and no one would know (including him) that the child wasn’t his. Unfortunately, the plan failed. The Man then, knowingly, sent him out on a very dangerous assignment where he was killed. After the appropriate amount of time passed for The Beautiful One to grieve, The Man married her. They would live happily ever after and no one would be the wiser.

However, that was not to be. God sent someone to bring home his crimes to the conscience of The Guilty Man.

The Man was broken and became truly repentant. He wept bitterly and confessed his sins before God, (holding nothing back). He had committed adultery, murder, and he lied to cover it up. The Man understood that God was the One against whom he had ultimately sinned.

God’s man explained that even though The Man was repentant, there would be serious consequences to pay. The child that was born to The Man and the Beautiful One would die (and he did) and that the sword would never depart from The Man’s household because he despised God and taken the Beautiful One to be his wife. He also told The Man that God would raise up evil against him from his own household, his family would have no respect for him and that He would give The Man’s wives to a companion and he will lie with them in broad daylight (and it happened just as God’s Man said it would).

The Man was King David, the ruler of Israel.

[Although this is a fanciful description of some of the key moments in his life, the essence is true. This man, a national hero, with a passion to serve God withstood temptation again and again as he was attacked. But at one point he failed, miserably.]

King David also is the author of about 80 of the Psalms. Psalms 32 and 51 reveal the deep struggles of his soul and his spiritual recovery. How could King David (The Man) live such a joy filled life and be called “A man after God’s own heart” after all that he did and the consequences he suffered because of it?

Good question!!! He experienced Joy in the Shadow of Great Failure the same way we can!

Because of the message the angel brought the shepherds that night – “Behold, I bring you good news of great joy for you and all people; today a Savior has been born, who is Christ the Lord.” (Luke 2:10–14) – we can all experience Joy in the Shadow of Great Failure!

Luke speaks of a global Gospel: the “Good News” is for everybody, not just the Jews! What was this good news? That God had sent a Savior, His Son Jesus Christ, to meet man’s greatest need, forgiveness of sins!

Having confessed his sins and repented, King David asked God to purify and wash him whiter than snow and to hear joy and gladness. He asked that God would create in him a new heart and renew a steadfast spirit in him. Then David asked God to “restore the joy of his salvation” and God did just that!!!

AFTER he sinned David continued to be known as a man after God’s own heart!

David’s career had been one of great prosperity and success prior to his sin. After becoming broken before the Lord, David did not allow his past failures to define who he was, instead David, having been restored by God, lived in the joy of his salvation.

What is keeping you from walking in the joy that is yours according to the message of the angels?

• Could it be that you have never confessed and repented of your sins before God?

Whatever it is won’t you determine today to make it right and to dance with joy, no matter the source of the shadows, on the platform where God has placed you!

To learn more about the life of King David I recommend you read 1 & 2 Samuel. You may be surprised by what you learn about “The man after God’s own heart”!