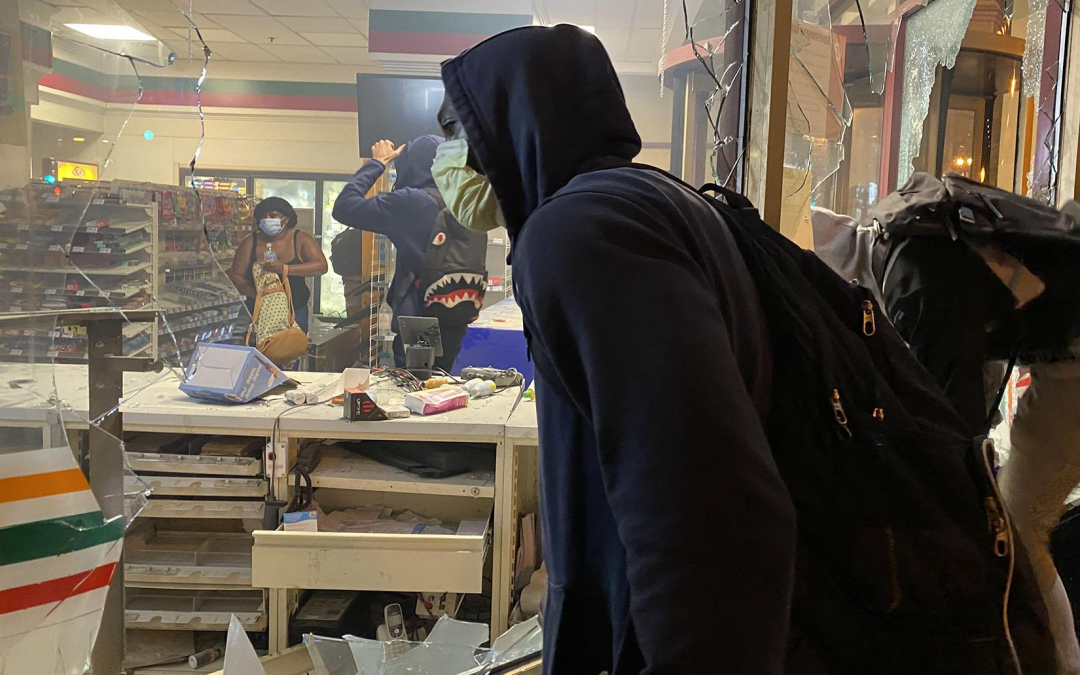 What in the world are they thinking?

Last Monday morning I woke up to the following headline

A Sunday afternoon shooting of the man who had opened fire on officers, set off a firestorm of misinformation spread across social media. The reports alleged a police-involved killing of a black teen on the city’s South Side late Sunday afternoon and appeared to encourage people to head downtown to create violence.

Hundreds of people descended on Chicago’s Magnificent Mile of upscale stores early Monday, with vandals smashing the windows of dozens of businesses and making off with merchandise, cash machines and anything else they could carry, and some pulled up with U-Haul trucks.

With tongue in cheek, someone said, “Nothing screams justice, like looting a Louis Vuitton store!”

“Chicago Police Superintendent David Brown said Monday that officers responded to a call about a man with a gun in the Englewood area; once spotting the man, they pursued him on foot after the man shot at them, police said, the officers returned fire.” – The Washington Post

Latrell Allen, 20, was charged with attempted murder Monday for allegedly firing on officer.

I watched in disbelief to a scene that is becoming way too common. In my heart I asked the Lord, “What in the world are they thinking?”

In these days of Covid-19, protests, riots, cries calling for the “De-funding” of police, conspiracy theories, fake news and political scheming, I have asked this question a lot. As I read and listen to the news each day, I am tempted to stop paying attention to all things news in my life.

But recently, God reminded me of the sons and daughters of Issachar, men and women who understood the times and knew what Israel should do. (1 Chronicles 12:32)

The sons of Issachar understood the times they lived in, but they also understood the political and spiritual times. They were a unique group of people that could discern what God was doing and when He was doing it. They excelled in knowledge of God’s law and were full of wisdom. The sons of Issachar were so sharp, and so spiritually in tune, that the whole nation depended on them to know what they ought to do and when they ought to do it.

Their ability to discern the times and seasons was an incredible advantage:

The answer is not to stick our head in the sand! Rather, we need to be like the sons and daughters of Issachar! We need to understand the times we live in, excel in the knowledge of God’s Word in order to be wise and spiritually in tune with what God is up to.

So, what does that have to do with my question and where do I start?

God answered my question by refocusing me. He took my focus off the horizontal, the headlines I was consumed with that morning, and reminded me of the truths I read last week in Psalm 36, He changed my focus to vertical. As I remembered what God said in His Word, my focus went from horizontal to vertical.

Start by becoming like the sons and daughters of Issachar.

As I said earlier God took me back to Psalm 36, which I had studied the week before, for the answer to my question. I often read a couple of Psalms daily to set my focus for the day, its a practice I started as a young believer and have continued to do. I read the Psalm that coincides with the date, then add 30 to it and read the next one, until I’ve read to the end of Psalms.(Ex. last week on August 6 i read psalms 6, 36, 66, 96, 126. If I have time I may read the Proverb that coincides with the day)

Last week as I read Psalm 36 I just wasn’t grasping it, so I read it a couple of times and then decided to study it rather than simply read it. It was only after engaging the text in that way did I see what the Psalm was really about. Others who had written about the Psalm focused solely on God’s steadfast love, which is amazing. But, God showed me much more!

Rather than tell you what I learned from studying it myself, which is like feeding you already chewed food, I suggest you read it for yourself. If you are having a hard time grasping it, like I did, and want to see it clearly for yourself I am going to include a link to a Bible study which will walk you through Psalm 36 enabling you to see truth for yourself. The Word is powerful, when we see truth for ourselves it is imprinted on our hearts forever.