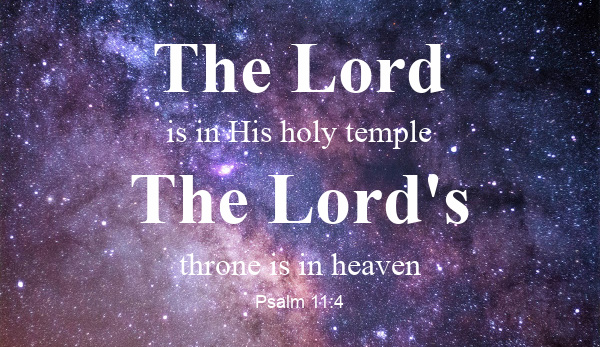 The Lord is on His Throne

I am incredibly grateful that, as a newborn believer, I was taught to read the Word of God every day. At first, I would sit down each morning, open my Bible, and read wherever it opened. However, my motives were not always the best. I read because I was told this is what God expected, and I wanted to be obedient. But I also wanted to check the box on the back of the offering envelope. In those days, we had offering envelopes with a checklist of things on the back that we should do each week. We were expected to pray, read our Bible, talk to others about Jesus, attend Sunday School, attend worship services, and give.  And we were expected to check those boxes so the pastor would know we were doing what we were supposed to do. Those were all things a good Christian did. So, I dutifully read my Bible to “check the box.” For me, those early days were more about God establishing a habit in me of being in the Word daily than it was about me getting to know God.

About a year later, my mentor taught me a simple method to help me be more intentional about my daily Bible reading. They shared with me that they read five Psalms each day, beginning with the Psalm of the day. For example, today is January 11, 2021, so I would read Psalm 11. But they read a total of five Psalms and a chapter of Proverbs each day. The way to do this is to read the Psalm of the day, today being Psalm 11, and add 30 to the date read Psalms 41. Then add 30 and read Psalm 71, then 101, and finally 131. Since Proverbs has 31 chapters, we would read the chapter corresponding to the date, or for today, chapter 11. I would often write down things I learned about God or truths that struck me.

Over the years, I have learned to read with a purpose by slowing down and engaging the text interactively. We’ll talk more about that in a moment.

However, today I was captivated by Psalm 11.

David is in a desperate situation. He was surrounded by the wicked, and his life was in danger. Despite his circumstances, David stands firm because of his confidence in the Lord. It was a confidence born out of years of walking with God from the time he was a young shepherd boy in the fields to his present situation as King ruling Israel.

His well-meaning but fearful advisors counseled him to “flee like a bird,” in other words, “run!” But David refused to run away from danger. He marveled at the suggestion from the fainthearted advisors because running denied his faith in the Lord, and they should have known better. He wondered where their faith was when they counseled him to run.

When faced with the temptation to flee or not to flee from the wicked who surrounded him, David held fast to his faith in the Lord. Instead of fleeing like a bird to a mountain where he would be safe, he fled to the Lord for refuge. Escape was out of the question! He made that point crystal clear in his message to them. “In the Lord I take refuge!” (v 1)

Out of their fear, his advisors began to argue the facts of his situation in order to convince him to do so.

The fearful focus on their surrounding circumstances and ask, “What can the righteous do?” That is a horizontal focus. David, however, has a vertical focus, as we see in verses 4-6.

David was a strong leader; whose confidence was in the Lord. When the fainthearted asked, “What can the righteous do?” David responded that the righteous can trust in the one and only source of secure government – the Lord who

David tried to help the fainthearted advisors see their circumstances from God’s perspective. Like a good leader, David wanted to move them from a horizontal focus to a vertical focus so that they would not be overwhelmed.

The kind of Godly confidence David displayed can withstand trials, persecutions, and temptations. David not only knows the truth about who is Sovereign over all the earth, but he also lives the truth so others may know God. Jesus also had confidence in the Father when He faced Satan’s temptations and the hostility of people. We can trust God to do what He said He would do!

Confidence in the Lord is a mark of Christian maturity!

Earlier I mentioned that I learned to read with a purpose by slowing down and engaging the text interactively. In doing so, my time in the Word was no longer merely an “academic” pursuit of knowledge. As I slowed down and interacted with the Word, both my mind and heart were engaged. In interacting in this way, the Word not only instructed and trained me how to be righteous, but it also reprimanded and corrected me in my thoughts and behaviors. But it didn’t stop there! The more I applied the truths I was learning, living in obedience to the Truth of the Word, the more I knew God intimately, and I grew spiritually. That growth has given me the confidence to stand firm in whatever situation I find myself in and to make Jesus known from those platforms.

Here are some simple steps to help you interactively engage the scriptures.

Note: David is the one speaking, and he is speaking to his advisors.

This time mark LORD including pronouns.

(I use a triangle. However, you can color it, circle it, etc. The point is to slow you down and see what you are reading.) When reading scripture, I always mark God, Jesus, and the Holy Spirit.

wicked, including pronouns and synonyms. I use a W over the word.

righteous, including synonyms with a circle.

Now the fun begins as you engage more with the scripture!

Make a list. Look at each place you marked LORD and write down all you learn about the LORD. For example:

in His Holy temple

Make another list. This time write what you learn about the wicked.

Now we will drill down a little deeper by asking some questions using the 5 Ws and H questions. (Who? What? When? Where? Why? How?)

David is in a desperate situation surrounded by the wicked, and his life was in danger. What point does David make before addressing his advisors in verse 1?

What advice have his advisors given him according to verse 1?

Who are they worried about, and why are they concerned?

To get a better understanding of what the wicked are doing, read Psalm 10:8-9, and write down what you learn.

Note: These foundations in verse 3 refer to the law and order of society established by God at creation. This is the belief that God is sovereign over all of His creation and is sustaining the order of the world. God’s justice and law are being replaced by self-rule resulting in anarchy/chaos.

According to verse 3, what is the concern of the advisors?

Where is the focus of David’s advisors? Explain your answer.

From all you have seen so far, how would you describe/characterize David’s advisors?

What is David’s response, according to verses 4-6?

Where is David’s focus?

What do you learn about the Lord in verse 7, and how does that relate to the upright?

Do you look more like the advisors or David? What would others say?

Look at today’s culture. Do you see any similarities to the culture David was living in? Don’t just answer with yes or no, if so write out the similarities.

If so, what have you learned from Psalm 11 that will help you stand in confidence in an evil and corrupt society?

How mature are you? What do you need to do to grow in maturity?

1  In the LORD I take refuge; how can you say to my soul, “Flee like a bird to your mountain,

2  for behold, the wicked bend the bow; they have fitted their arrow to the string to shoot in the dark at the upright in heart;

3  if the foundations are destroyed, what can the righteous do?”

4  The LORD is in his holy temple; the LORD’s throne is in heaven; his eyes see, his eyelids test the children of man.

5  The LORD tests the righteous, but his soul hates the wicked and the one who loves violence.

6  Let him rain coals on the wicked; fire and sulfur and a scorching wind shall be the portion of their cup.

7  For the LORD is righteous; he loves righteous deeds; the upright shall behold his face.