I didn’t marry my Prince Charming 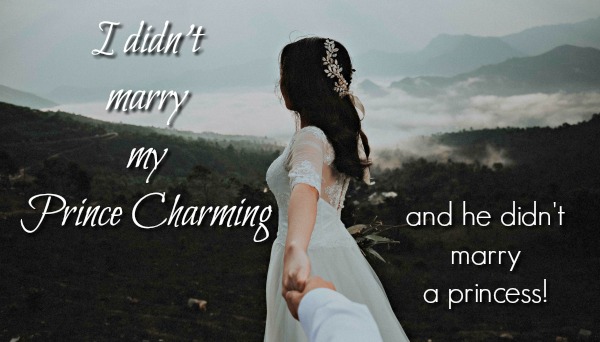 Recently a young woman was sharing about marital problems she and her husband were having when she stopped short and said, “Oh, never mind. You have the perfect marriage and wouldn’t even understand what I’m talking about.” I have had similar conversations over countless years which always leaves me shaking my head.

What people see is the forty year redemptive work of Christ on display in our lives, not our doing but His doing. Hopefully a covenant-keeping display of Christ’s love for His Church.

Often Instagram, Facebook and other social media platforms give us a “snapshot”, at best, of the lives who post them. Lives framed in perfect portrayals of marriage, child rearing and life. Actually even those “Keeping it real” posts often give you a cleaner version of the one who posts them’s “reality”. After all, even though we claim to be keeping it real, we still don’t want the dirt in our corners, dust on the furniture and the kid screaming and pitching his dirty diaper across the room out there for the whole world to see!

At times I almost felt like I needed to apologize for having a godly marriage. However, isn’t a godly marriage the picture that we are supposed to present to all who are watching, rather than marriages that seem to be fodder to the writers of some sit com? (Ephesians 5:22-32)

In our marriages we are to be putting God‘s covenant-keeping grace on display!

The truth is, I didn’t marry my Prince Charming and he didn’t marry a princess. It took a lot of work and God’s hand, to mold and conform us into who we are and the marriage we have today. That is why I wanted to share this story with you. It is my prayer that someone reads this and sees the hope that can be theirs too.

She had joined the Air Force and for the first time in several years she felt safe and now this stranger was chasing after her.

In order to understand their story fully we need to look at a little context.

Unfortunately while on her honeymoon those stars in her eyes went dark and like a balloon with a broken string, her world with all hopes and dreams drifted away. That string around her finger was replaced with the shackles of abuse of the emotional, physical and sexual kind.

After a few short years she was battered, broken and alone, convinced she was fat and ugly and that no one would ever love her. (A mantra she heard daily from her husband) Even after they no longer lived together she lived in fear that he would break in once again and the abuse would continue.

With the realization that her “Once upon a time” was never going to have a fairy tale ending, she reached deep down to that place of strength buried deep beneath the rubble of her dreams, and cut the cords which held her captive.

No longer tied to her circumstances she took flight, literally.

She had chosen her escape route and a whole new chapter was about to be written. She had joined the Air Force and was headed to San Antonio for Basic Training.

Shortly after the plane took off the pilot came on and said “ We have reached our cruising altitude of 36,000 feet…” She immediately felt her body relax as a loud sigh escaped from her lips.

For the first time in several years she felt safe.

A new chapter was being written, one that offered an opportunity to rise up out of the pile of broken dreams, clear her head, reclaim her confidence and gain new strength!

She came to basic training, broken and battered.

For the next six weeks she didn’t have to worry about what she would eat, what she would wear or where she would live. All she had to do was follow orders and allow this time of training to give her a firm foundation on which to build her future on.

As the weeks marched on she began to feel her strength returning. Not just the physical strength from the PT but emotional strength as well. She marched with her head held a little higher than when she arrived and on graduation day she went to her next assignment with a cautious optimism.

As she boarded the plane for the next leg of her journey she wondered if her story was going to have a happy ending after all.

For the next six weeks she would be in school studying to be a med tech in order to prepare for her permanent duty assignment as an aeromedical evacuation technician. Having escaped from an abusive relationship she was not interested in jumping into another. So, she was focused on becoming the best med tech she could be and she studied hard, perhaps a little too hard according to her roommate.

It was Saturday and her roommate convinced her to go to a mall with her and a friend. At the appointed time her ride came and she hopped into the backseat. That’s when she realized that there were 3 people in the car, not 2! In the back was a guy who looked at her with anticipation. He thought it was a blind date, she thought she was going with friends to the mall.

Feeling the sting of betrayal she sat silently in the back seat hugging the door, the unsuspecting “date” drank in the perfume of rejection.

But, not one to take rejection sitting down, the next day he set a trap for the allusive young lady. Let’s suffice it to say that his trap was unconventional, to say the least. For six hours they were confined in the same place, she was extremely unhappy and unable to leave. As the hours wore on she eventually became still. When she did he moved in with honey dripping off of his lips, and she was drawn in by his sweetness.

His sweet words and attentiveness broke down the walls built to protect the wounded and broken one, and he walked right into her heart before she even knew he was there. Could it be possible that someone would love her? Could he be the Prince Charming she had always hoped for? The song of the past played in the background of her newfound love, but she ignored it in hopes that it would fade away.

He began life in a very small town tucked away in the panhandle of Oklahoma as the first child of an extremely young couple. Grandparents, family members as well as members of the community helped to raise him because of the youth of his parents. He was the apple of his grandfather’s eye and the mascot of the senior class.

However, while in elementary school his life circumstances changed and he moved away from that small town and his grandfather, aunt and uncle whom he adored. It was to be the first of many moves.

As the years went by school pictures began to portray something in the young boy’s eyes. His eyes, once twinkling and bright, depicted a fading brightness turned into sadness and eventually the darkness of anger. By the time he graduated high school he had moved fifteen times, was an alcoholic and a womanizer.

Just out of high school the young man joined the military as security police and eventually became a dog handler. His womanizing continued until his blind date became “the one”, unfortunately alcohol was the “other woman” for a number of years.

Their “Happily Ever After”

It looked as though she had finally found her Prince Charming!

As the days turned into weeks, then months, and overlooking a few potholes in the road they were on, they both agreed it was time to get married. So, without all the pomp and circumstance, on April 1, 1977 they tied the knot in the presence of a few friends, long gone.

At first the road was smooth except for those potholes, once overlooked, but they were considered a minor detour as they stepped around them. After not so many months those potholes seemed to grow, until one day they took on the appearance of huge bottomless chasms on which they found themselves on opposite sides.

Unable to communicate they took up rock throwing to get the attention of the other. At first the rocks stung a little and left small marks. But after a while the barrage of rock throwing began to take its toll and the baggage, which was thought to be tucked ever so neatly in the past, was split wide open like Pandora’s box.

Prince Charming was no longer charming. The damsel was more distressed than ever!

Unleashed were the fears, insecurities, brokenness and coping mechanisms of past lives now reborn. Alcohol, anger, inferiority, fears and lies believed, fueled the fires of destruction.

From the midst of the flames a cry was heard. It was the cry of one longed for, yet born amidst the destructive fires, a girl child, one loved nonetheless. She melted hard hearts and served as the glue that held the two together as the fires seemed to subside.

Their tours of duty ended, bringing to an end this leg of the journey.

With a new leg about to begin, came hope renewed. Excitement of new beginnings began to build and the future began to look brighter as they moved across country with a helping hand of promise on the other side. They were hoping for a do over.

However, not many months into the help they had been offered, life became strained. The environment quickly became toxic and once again they found themselves walking on eggshells, not with each other but with those who had offered help. It became clear it was time to leave.

The little family moved out on their own and for a short time they were able to breathe.

Soon the stresses of being alone in a big city, waiting on the new job to begin along with their past history began to take a toll.

Unfortunately, although the flames of destruction in their history had died, their pain was still smoldering beneath the surface. They were desperately trying to keep their pasts from erupting once again into flames of fury.

He entered the police academy and threw himself full force into becoming the best officer he could be. At home he spent most of his time working out, studying, practicing techniques, losing himself in the pursuit of perfection. She became more and more anxious, trying not to push buttons and constantly second-guessing herself until she felt as though she had fallen into a deep hole.

It was then that she decided to take the girl child and go for an extended visit with her family. He didn’t argue, in some ways he was relieved that now he could fully concentrate without all the distractions. Yes, he would miss the girl child, but he would spend more time with her once he was out of the academy

It would also be a good time to clear his head and begin to think about what the future might hold because the present wasn’t looking too promising.