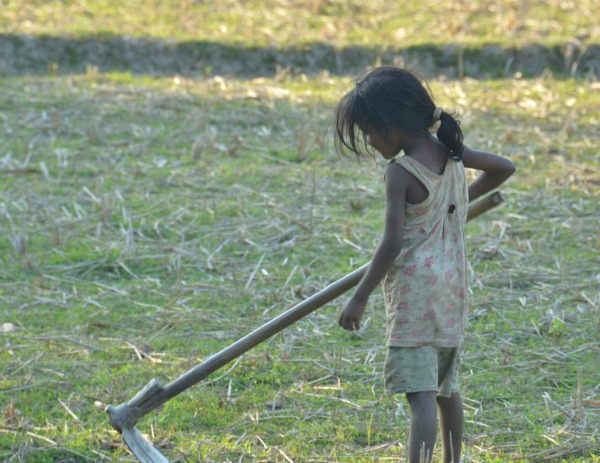 Our team was driving in the state of Assam to check on a bridging school when this little girl digging a hole in a rice paddy captured their attention. She was one in a group of other children.

When they stopped to see her, an older man came out of the house on the property. He seemed friendly enough and not upset that we stopped but the leader of the team was worried about her after they left. Unfortunately she was too far away to attend the bridging school of our pastors attending our Timothy Leadership Institute (TLI) in that area. 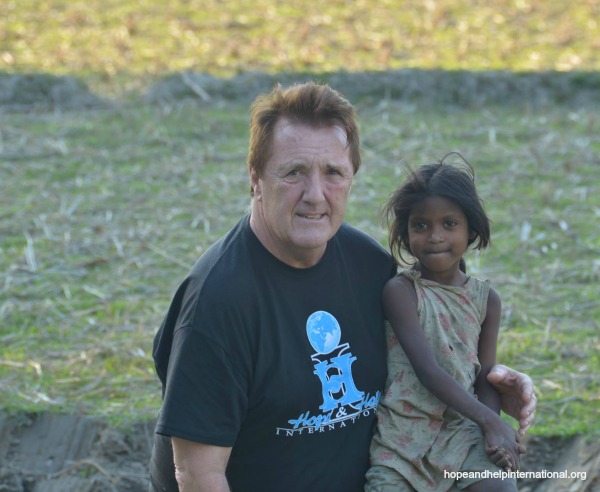 One Tuesday during a trip to South Asia we attended church and then I walked through the small village where tea garden workers lived. We saw women washing clothes at the village well and sweeping the dirt in front of their huts, children were playing and men were milling around talking.

At church I learned the reason they met on Tuesday was that it was their day off from work at the tea garden. The workers spent 10-12 hours/day picking tea leaves and making $1.50/day and usually both the husband and wife worked. Many children “help” their parents and receive no pay at all. If a worker was sick they lost a day’s wages but if they were sick on Sunday they were docked three days pay, so they all met on Tuesday in order to not lose wages.

It wasn’t until later I found out many of the children were not just “helping” their parents, but were forced to work picking tea leaves as well. Unfortunately, the tea gardens are not the only place where you find children working very long days in grueling jobs.

Sadly, India has the largest number of child laborers in the world!

It’s estimated that millions of children, mostly 5-14 years old (although some are as young as three) in India live as modern-day slaves. It is hard to pin point exactly how many children are working because many aren’t officially registered at birth and of course the owners keep the existence of child slaves a secret. They work in the fields, in factories, brothels and private households — often without pay and usually with no real chance of escaping.

Unfortunately poverty, death of a parent(s), lack of education, are all factors in the child labor phenomenon. The majority of the children are sold for as little as 80 rupees ($1.33) by a relative. Or their own families, with promises that they will be treated well, hire them out. When traffickers hand the youngsters over to an employer, they earn a commission of up to 1,000 rupees, or nearly $12 per child. Often times these children are taken to another part of India never to be seen by their parents again.

The conditions in which the children work are unregulated and they are often made to work without food and very low wages.

Aid organizations estimate that three-quarters of all domestic servants in India are children, and 90 percent of those are girls.

Physical, sexual and emotional abuse of child domestic workers is not uncommon. Often, children are placed by their families in these homes because they can’t afford to care for them and/or they need the extra income.

Although both child labor and child trafficking are illegal, police rarely intervene and the courts seldom convict child traffickers and slaveholders. 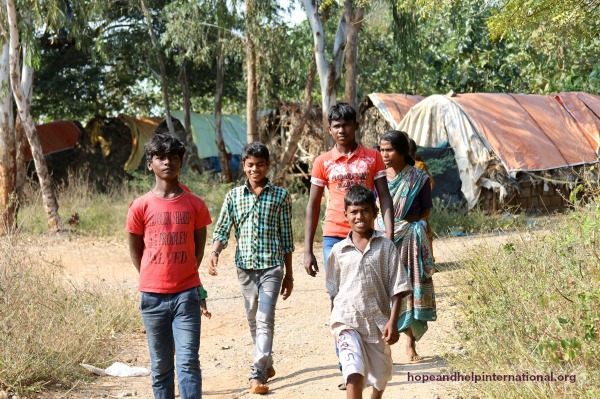 One of our national partners has a bridging school in a slum area near a rock quarry. They are given hope for a better future and protected from traffickers who scour the slums for children to abduct or sometimes buy.

Unfortunately this work is not as easy as it seems. Although the parents would like their children educated many factors are working against the bridging school, with abject poverty playing the leading role. Students often miss school because the parents need them to work and earn more money for the family. For the parents it is the only life they know and their needs are so great, it is hard to convince them to keep their children in school.

The families are in essence enslaved to the owner of the quarry. The children are forced to work because they are cheap labor. Kids break rocks or carry larger stones to the rock piles if they are strong enough. It is hard work, the days are long and the pay is extremely poor.

Now that you are aware that slavery does still exist don’t just give it lip service, take action!!!

Hope and Help International offers many opportunities for you to be a vital part of abolishing slavery. Check out our website to find out more — > hopeandhelpinternational.org.