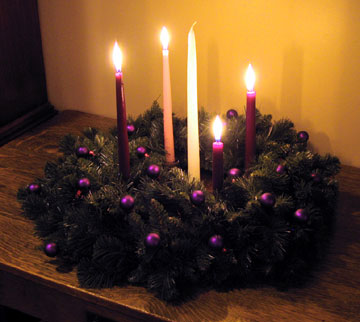 The fourth candle is often called the angel candle. It represents the messengers who announced the birth of the Messiah.

In the same region there were some shepherds staying out in the fields and keeping watch over their flock by night. And an angel of the Lord suddenly stood before them, and the glory of the Lord shone around them; and they were terribly frightened. But the angel said to them, “Do not be afraid; for behold, I bring you good news of great joy which will be for all the people; for today in the city of David there has been born for you a Savior, who is Christ the Lord. This will be a sign for you: you will find a baby wrapped in cloths and lying in a manger.” And suddenly there appeared with the angel a multitude of the heavenly host praising God and saying, “Glory to God in the highest, and on earth peace among men with whom He is pleased.- Luke 2:8–14

Clarence in “It’s A Wonderful Life”? Or maybe chubby little cherubs with curly hair and stubby wings come to mind. Often people think of friends or loved ones, especially children, who have died. At a child’s funeral you sometimes hear a grieving parent say God called one of His angels home. It is interesting that those sorts of angelic figures exist in our culture. But, they are not the angels of Scripture.

Then the angel of the Lord went out and struck 185,000 in the camp of the Assyrians; and when men arose early in the morning, behold, all of these were dead. – Isaiah 37:36

Angels are terrifying executors of divine judgment. It was 2 angels which brought judgment to Sodom and Gomorrah. And much later, when Nebuchadnezzar’s pride got the best of him, it was an angel which declared his kingship would be cut down like a tree. (Daniel 4:13-17)

In Revelation it only takes one angel to seize Satan and throw him into the pit for a thousand years. (Revelation 20:1-3)

These are not chubby cherubs but terrifying creatures who have authority to execute the judgment of God.

Angels shut up the mouths of lions (Daniel 6:22) and open prison doors (Acts 12). They execute divine judgment, but they are also the manifestation of a very present help in time of need. They are sent to protect the children of God.

This messenger idea is actually one of the main tasks of angels in the Bible. They were the messengers of God. Often when they appeared the first words they said were “Do not be afraid!’ This was probably because everyone there was afraid. The angels in the Word of God seem to have been terrifying. Men fainted and women cried when they realized they were talking with an angel. After all, angels were the ministers of judgment sent from God. But, they were also messengers to those who had found favor with God.

In Luke 1:8-20 the angel Gabriel announced to Zacharias that he would father a son, John, who would be the forerunner of the Messiah.

In Luke 1:26:-38 Gabriel visits Mary to tell her she would give birth to the Messiah.

Mary, said the angel Gabriel, you will have a son,

And behold, you will conceive in your womb and bear a son, and you shall name Him Jesus. He will be great and will be called the Son of the Most High; and the Lord God will give Him the throne of His father David; and He will reign over the house of Jacob forever, and His kingdom will have no end. – Luke 1:31–33

In Matthew 1:20-25 it was an angel that told Joseph in a dream to take Mary as his wife because the child she carried was conceived of the Holy Spirit.

…behold, an angel of the Lord appeared to him in a dream, saying, “Joseph, son of David, do not be afraid to take Mary as your wife; for the Child who has been conceived in her is of the Holy Spirit. She will bear a Son; and you shall call His name Jesus, for He will save His people from their sins. – Matthew 1:20 –21

In Luke 2:8-14 Jesus’ birth was announced by angels to a group of shepherds just outside of Bethlehem.

…for today in the city of David there has been born for you a Savior, who is Christ the Lord. – Luke 2:11

The angelic host proclaimed the birth of the Savior, the Messiah (Christ), the Lord. The angels have always been messengers of God. On that first Christmas day they came to declare there is a new king in town, one whose rule will never end. And at His name, Jesus, every knee will bow, of those who are in heaven and on earth and under the earth, every knee will bow.

The fourth candle reminds us that the angels are the messengers of God who, in this case, bring good news. The good news is that there is a new King in town, and he is taking over. That is the message of the angels to everyone who will listen.

In prayer ask God to forgive you of your sins and allow Him to have the authority in your life.

If you are reading this and you give your life to Christ, please let me know. I would love to pray with you and come alongside you to help you grow in this new relationship. I would love to hear from you!